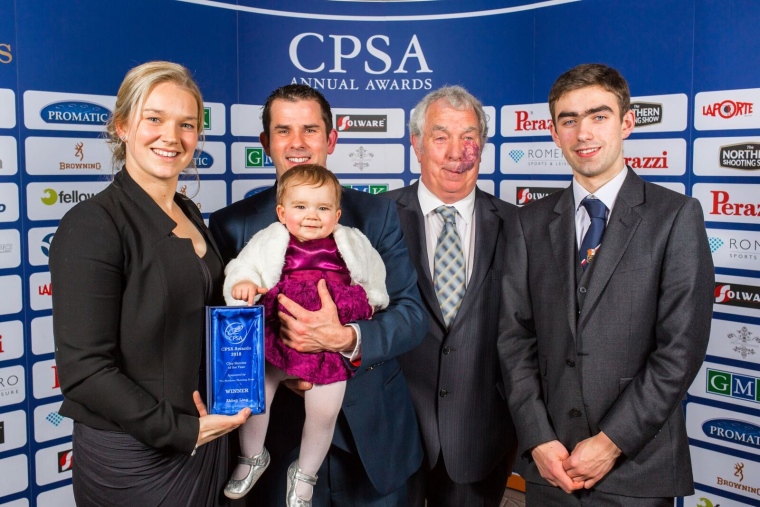 Abbey Ling has been voted Clay Shooter of the Year at the CPSA Awards, which took place at The Belfry Hotel & Resort on Saturday evening. Following husband Ed’s success at the Awards last year, the Clay Shooter of the Year crown rounds off a memorable 2017 for Abbey which saw her win the World and European Championships as well as the English, British and UK titles in Universal Trench.
After receiving the award Abbey said, “Thank you to everyone who has voted for me, I wasn’t expecting to win the award – this one’s for the girls!”
Abbey then thanked her family adding, “I must mention my grandad who first got me into the sport and continuing on from him the Ling family who have taken me under their wing.”
Comedian Jarred Christmas hosted the awards, with names from all corners of the shooting industry in attendance. The event was also attended by the Deputy Mayor of North Warwickshire, Councillor Denise Clews.
A total of ten awards were presented on the night, each focusing on a different aspect of the sport to acknowledge outstanding achievement in that field. All the nominees and winners of the awards were voted for by CPSA members.
The Emerging Shooter of the Year was introduced in 2018 to recognise a shooter of any age or discipline, who is starting to show exceptional talent. Leah Southall was clearly delighted to pick up the award.
Lucy Hall rounded off a hugely impressive 2017 by collecting the Young Shot of the Year award. Whilst Alec Sperling was named Disabled Shooter of the Year following his Sitting Team Gold in Olympic Trap at the World Shooting Para Sport World Cup.
John Bellamy was clearly very humbled when he was named Coach of the Year, commenting, “When I ceased competitive clay target shooting I never thought that my coaching path would lead me to winning this award.”
The British Shooting Talent Pathway was voted Development Initiative of the Year and Cheshire took the County Committee crown for the second year running.
Kevin Howarth was a key figure on the Cheshire committee and was posthumously named Volunteer of the Year for 2017, with his wife Karen receiving the award on his behalf.
Many English Sporting shooters considered the British Open at West Midlands Shooting Ground to be the best shoot of 2017 and Tom and Deb Jones duly collected the Ground of the Year accolade.
Paul Chaplow is one the most recognised names in DTL shooting and he received the Special Contribution Award, acknowledging his service to the Association, the North of England regional committee and to his country, having shot for the England DTL team for the past 14 years.
Nick Fellows, Chief Executive of the CPSA said, “I would like to congratulate all the Award winners who have been voted for by CPSA members, to be recognised by your peers is a great accolade. We’re delighted to see so many people acknowledged and honoured here tonight in what has been a fantastic celebration of all that is good in our sport.”
He added, "Following the success of The Awards dinner last year, it was an easy decision to return to The Belfry, but I think we have managed to further grow the event from 2017. I would also like to thank our sponsors for their support in helping to change how we recognise the many achievements of our members and for contributing to the success of the Awards.”
Massive thanks must go to all the sponsors who supported each of the award categories, many of whom generously donated prizes.
Full list of winners:
Clay Shooter of the Year: Abbey Ling
Special Contribution Award: Paul Chaplow
County Committee of the Year: Cheshire
Disabled Shooter of the Year: Alec Sperling
Ground of the Year: West Midlands Shooting Ground
Young Shot of the Year: Lucy Hall
Volunteer of the Year: Kevin Howarth
Development Initiative of the Year: Talent Pathway – British Shooting
Coach of the Year: John Bellamy
Emerging Shooter of the Year: Leah Southall