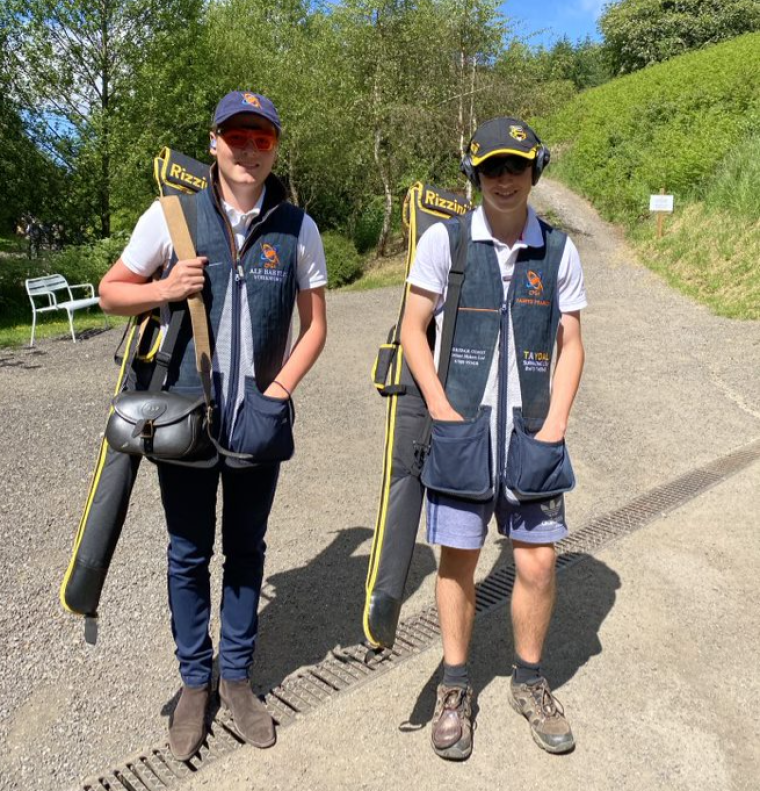 Swinton and the Sporting Colts

On Saturday 12th June, E.J. Churchill at the Swinton Estate played host to the second CPSA Sporting Initiative 2021 Masterclass. Two of the chosen shooters, Alf Bartle and Jasper Pearce, joined Mark Baxter, one of Swinton’s great coaches for a morning of shooting.

Mark took both the Colts around the range of stands on display at Swinton, which are beautifully spread through the valley of the ground. They combined the forest on one side of the course, with field banks on the other, which are broken by the stream meandering down to the clubhouse. With the sound of running water and the secluded location, topped with the glorious sunshine of the day, the ground was the perfect setting for a morning of shooting; although the tranquil setting was soon filled with the sound of the boys’ breaking clays with their Rizzini guns.

Jasper and Alf are still getting used to their new Rizzini shotguns, and both wanted to utilise the masterclass to not only add some more practice with their guns, but wanted to experience all the stands at Swinton, with one of their top coaches over shoulder giving them both so pointers. This was because EJ. Churchill at Swinton is hosting the CPSA British Open English Sporting later this year in September.

Mark helped each of the Colts to focus on their weaknesses in the Masterclass to help them fine tune correcting them. Both Alf's and Jasper’s focus was to mainly not rush through the targets. Both managed to slow down their shooting, utilising an extra millisecond of time, to focus on the shot and give them that fraction of a second more to get to the clay, to guarantee the shot.

As the two made their way round the course, following the stream that divides the ground from one end to the other, Mark spoke to the Colts about more than just their shooting technique. He asked about their nutritional habits while shooting competitions, and talked through having enough energy with healthy snacks on them, to help keep them focused in a variety of situations, promoting bananas and nuts, over sweets. Mark also advised on maintaining hydration to a manageable level, and both shooters said they would prefer to stay on the course when in competition mode and not diverting to the bathroom, resulting in sipping, not glugging, water or Lucozade as they walked the course.

Both Alf and Jasper went away feeling they could hit more targets, and with Swinton offering such a variety of targets, both said they were pleased to work on targets neither had come across before. The Masterclass has given them a lot of things to add to practice at home, both for the practical element of shooting, as well as competition prep, with the aim to help them achieve their shooting goals.

If you would like to know what the two shooters thought of their day, please click here.

Thanks to E.J. Churchill at Swinton Estate, and to Mark for supporting the Initiative and putting on such a great Masterclass for both the Colts.