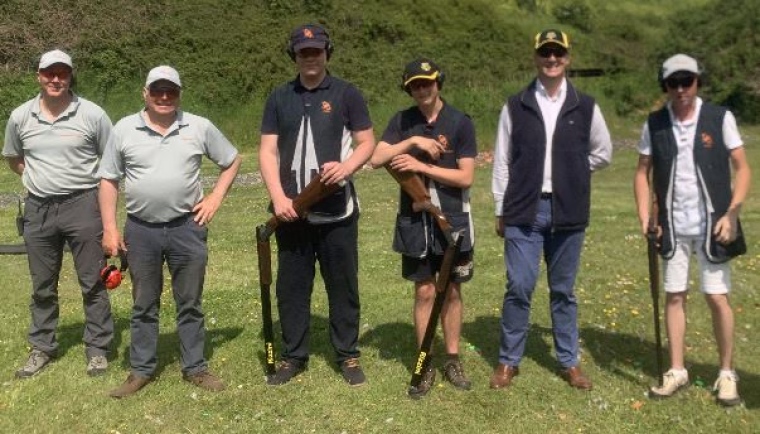 On 3 March, during half term, CPSA hosted the first of a series of Masterclasses for the Sporting Development Initiative. The young shots participating in this year’s Initiative were invited to the gorgeous ground of High Lodge to have a training day with clay-shooting legend John Bidwell.

The day started with an introductory talk from John, highlighting his passion for shooting and the method he has created that has brought him, and those he has coached, success over the years. He spoke to each of the young shots individually, with Charlie Bird, Darcy McBride, and Jasper Pearce all talking about the methods they use and what they hope to get out of the masterclass.

John spoke wise words, emphasising that he wanted to focus the Colts and bring them back to basics in understanding the gun and pattern, “All we are trying to do is intercept the clay with the shot stream. Whatever technique you use, you just have to account for speed in your technique, depending on the targets”. John did some spot-test examples and got the guys to catch a little ketchup packet off guard, to try and understand vision verses coordination. “Keep your eye on the target and the gun will point to aim” said John, who spoke to the youngsters about how it is easier to talk about how you missed rather than how you smashed a target, as instinct can take over when you hit it.

The day was broken up into three sections. The morning involved evaluating the basics, with John over the shoulder of each of the Colts reading the positioning for the targets and offering points and tips. After lunch, the Colts enjoyed a talk from Edward King of ASI, the UK distributor of Rizzini shotguns; as well as a masterclass on Social Media Optimisation with CPSA HQ’s Phoebe Grant. The afternoon was made up of a shooting a mix of targets that each Colt had specified they needed to work on.

During the morning,  John wanted to ground the Colts and prioritised basics. He spoke about his 'Move, Mount, Shoot' method and encouraged the shooters to get out of their comfort zone and try shooting gun-down. Charlie said he found this method improved his shooting and would take this forward in practice. Jasper also felt that the gun-down method helped slow everything down and gave him the time he needed to consistently break each of the clays. As John highlighted, “[The] Slower you move, the faster you shoot with the right technique”.

John said to the young shots “If you want to achieve your dreams you can do. Practice makes perfect, but really, it’s perfect practice. It’s better to shoot 50 shots on the right thing and learn, than 200 and just banging away incorrectly”. John made sure that each Colt maintained their focus by doing little and often, rather than over stretching practice. This enabled the youngsters to implement each learning point in succession for the range of targets. John was made sure the Colts understood that “If you want to be good you’ve got to be consistent”

Darcy learned about the need for correct and consistent positioning, which was causing him to stop his gun due to the lack of space he was giving himself on the through-swing. John helped him to realign every time, ready for the target coming, and learning about change in body position for each type of target.

We were delighted to have been joined by Edward King of ASI to discuss the Rizzini shotgun that the Colts have all been offered to shoot as part of the sponsorship deal for the year. Edward spoke to the Colts about Rizzini in the UK and how the aim of Rizzini in this programme was to not only help their shooting, but to open discussion about adjustment and feedback on their experience with the gun. This feedback will help shooters all over the world to better enjoy Rizzini.

The afternoon session saw John and Andy Coppen, also of High Lodge, present some high driven targets to help prepare the shooters for the variety of ways the targets can be presented. To help re-focus the Colts, a competition element was involved, and the scores were recorded by Edward, who enjoyed seeing how the Rizzini’s were being shot by the Colts. The pressure was on, with CPSA CEO Iain Parker offering the highest scorer a Musto voucher. Charlie, Darcy, and Jasper all zoned in, and for each target and layout clearly demonstrated the implementation of John’s suggestions; the scores were incredibly consistent for each of the Colts (this might have been helped by the Colt’s parents who were cheering in the background, hoping for a share of the Musto voucher their son was aiming to win). Darcy was victorious, winning by just three.

John Bidwell summed up his experience of the day: “It’s been a very constructive day, I think, for these youngsters, I’ve really enjoyed it. I mean I’ve sort of retired from coaching on a regular basis in the last few years, Andy and the boys have taken it on, but I’ve really enjoyed it today. I’ve seen some real benefit come out of this and these youngsters are the future at the end of the day, and they need all the help we can give them. I’m delighted to be able to have the opportunity, along with the CPSA and all of the other sponsors, to help out. It’s been a real pleasure and I’ve really enjoyed it.”

If you would like to know what Charlie, Jasper, and Darcy thought of the day, you can watch their re-cap videos here.

Our thanks go to John Bidwell and Andy Coppen for putting on an amazing day of shooting for the Initiative at High Lodge, and to ASI and Rizzini for their support of the Colts. We are also grateful for Solware, Swatcom, and Musto for kitting out the shooters.