English Sporting (ESP ) is the most popular discipline in England. From November 2017 to October 2018, 56 percent of all CPSA Registered targets shot were ESP (DTL was next with 15 percent). In ESP shooters move across a course of stands set across a wide range of terrain, often set far apart. The terrain can vary from woodland to farmland to rolling hills or cliff faces – whatever is available on the land is fair game. For this reason, it is sometimes likened to ‘golf with shotguns’.

Targets at each stand can be anything that is safe. The types of targets thrown are often named according to the type of game they simulate such as ‘rising teal’ or ‘high driven (pheasant)’. There is even a type of target that is thrown so that it rolls and bounces on the ground, called a ‘rabbit’. At each stand there is a shooting cage where the shooter stands, with bars on the sides and top that prevent the shooter from moving the gun too far in any direction that would be unsafe.

The stand will have a sign telling the shooter what the targets are. Targets in ESP are usually engaged as pairs. If the pairs are thrown at the same time, they are called ‘simultaneous’, or ‘simo’ pairs (you may also hear Americans call this a ‘true pair’). If the second target is thrown after the first target is shot at it is called ‘on report’ (abbreviated O/R). A ‘following pair’ is when two targets are thrown from the same trap, one right after the other with no pause. At each stand shooters have ‘full use of the gun’, meaning they can shoot either target that they want to first on a simo pair, and can use both shots at one target if they want to. The targets thrown can vary in size and colour.

FITASC Sporting (FSP) is a similar international discipline, governed by FITASC ( Fédération Internationale de Tir aux Armes Sportives de Chasse). FSP targets are shot ‘gun down’, meaning that the gun can’t be mounted on the shoulder until the targets are thrown. 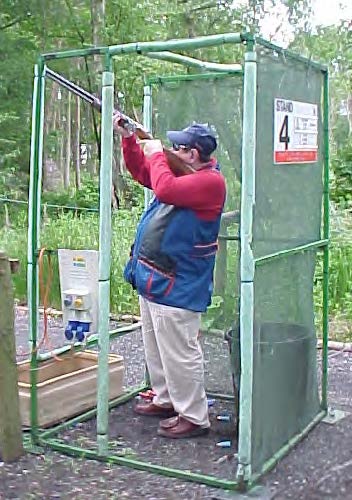 Shooting English Sporting
1. There will normally be a sign or board indicating the number and type of targets, e.g. “rabbit from right plus quartering midi on report”.
2. Shooters must not load until they are on the stand and inside the safety enclosure, with the gun pointing down range and the referee indicates it is safe to do so.
3. Guns must not be closed until the shooter is ready to call for a target.
4. Before he takes his first shot, the first shooter of a squad will call for a pair* so all shooters can see their speed and trajectory. (*Singles, though rare, are allowed)
5. The gun can be pre-mounted if the shooter wishes.
6. On calling “pull”, the target(s) will be thrown.
7. The shooter then shoots the allotted number of targets.
8. When the shooter has shot the allotted number of targets, the gun must be opened and unloaded before leaving the stand.
9. When each shooter has completed the allotted number of targets, the squad or individual moves to another stand.
10. If shooting in a squad, on the second stand the second shooter shoots first, on the third stand the third shooter and so on.
11. Procedures in 5 to 11 above are repeated until all stands/targets have been shot.
12. Except for formal competition, the stands may be completed in any order.
13. Scoring is straightforward, each “hit” scores one point, a miss scores zero.
14. If a pair of targets is thrown and both are broken by the first shot, both are scored.
15. If on a simultaneous or following pair the one target is hit and the other is a “no target”, nothing is scored and the pair is repeated.

Gun Hold Point
Unlike Trap targets, Sporting targets are so varied and unpredictable that a simple strategy or rule for visual pick up, gun hold, lead and break zone is difficult to state. The best technique, is to employ the finger pointing technique on each target, as taught by CPSA Instructors and Coaches to establish visual pick up, gun hold and hit points. The visual pick up point, should be where the target is first clearly seen. The gun hold point, should not be so close to the trap that the clay whizzes past the barrels, causing difficulty catching up, and a miss behind, or so far out that the barrels swing through the intended hit point and the gun stops due to lack of space. With Sporting targets, there is no substitute for a few lessons from a CPSA Instructor or coach, augmented by practice and experience.