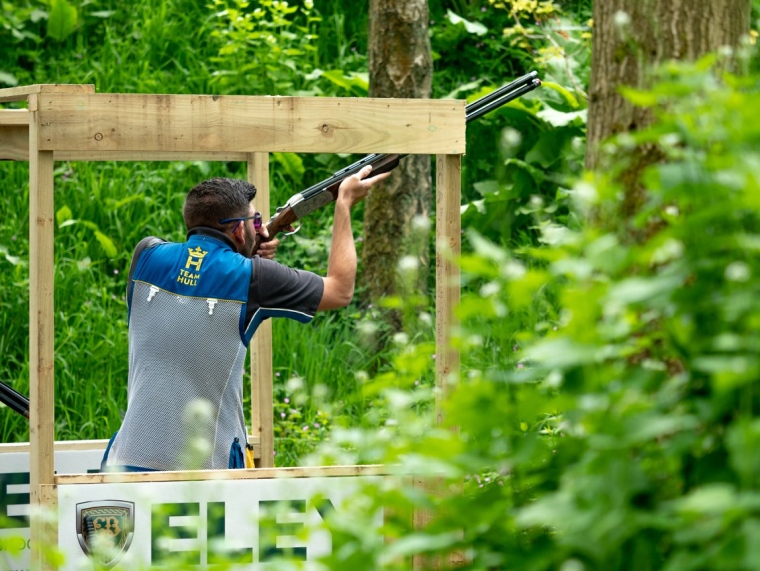 Last year's English Open High Gun Paul Simpson shot the second 107 of the week at Atkin Grant & Lang to join Nick Hendrick at the top of the leaderboard at the end of day two.

Jack Lovick shot a solid round to finish on 104, but ultimately fell just short of the benchmark. Whilst many feel that there might be a few extra targets out there, the general consensus so far is that 107 should see Paul and Nick through to the final.

Clear skies and warm sunshine continued to prevail on Wednesday but the shooters out in the first few squads on the day struggled to make a breakthrough. AA shot Ed Solomons was out in the first squad of the day and shot a 102 but still enjoyed his round and posted on Twitter saying, "Nice to see some real targets thrown at Atkin Grant & Lang. Great change from the current trend of card fillers all round. Hope weather holds, well done all involved!"

Phil Easeman and daughter Amy shot in the same squad as Ed and scored 99 and 90 respectively, with Phil commenting, "It was a fantastic course, tough in places but the course looks immaculate and the guys have done a really good job."

Whilst there was plenty of action on the course, Eley Hawk were trialling a new product with shooters off of it. Managing Director Eduardo Hernando was on the Eley Hawk stand with the new Eley Hawk Titanium and Titanium Striker and was inviting shooters to test the products on the Pool shoot. Eduardo said, "This year we are celebrating our 190th anniversary and we thought the best way to celebrate reaching this milestone was to launch our latest premium clay cartridge - Titanium and Titanium Strike, both for the first time are a nickel headed cartridge."

"Feedback has been very positive, saying how fast and smooth the cartridges are. The full launch will be at the Northern Shooting Show this weekend and then the cartridges will be available from mid to late May."

In the Ladies category Emma Stacey shot 96 on the day to lead the way, whilst Hannah Gibson shot in the afternoon and posted 92 to sit in second.