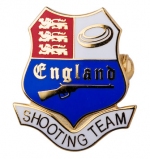 Below is the required dress uniform when representing England.

To order the uniform, please continue to the team shop.

DRESS UNIFORM
(to be worn for the official team photograph, at the Banquet and whenever requested by the Team Manager)